"I think it's very important to be right and wrong," said Big Truck Rental President Jeanie Dubinski during a recent WasteExpo 2016 panel on women leaders in waste & recycling. "You learn so much from being wrong ... I tell my kids, I tell my employees, 'Try and fail.' We will get so much farther if we try and fail instead of just sitting on ideas."
The morning following her inspiring panel, Dubinski walked the stage at the National Waste & Recycling Association's Awards Breakfast to be honored as a Member of the Year. After starting her career in the waste industry about eight years ago, Dubinski has been an example for industry women on the power that having confidence and a strong voice can unlock. Having served as a president on NWRA's Women's Council, Dubinski has dedicated her career not only to improving the garbage hauling industry, but also empowering women to reach for the top.
For our fourth installment of the "Women in Waste" spotlight series, Waste Dive caught up with Dubinski to get her perspectives on leadership, networking and bringing young women into the industry.


Waste Dive: Would you mind giving me a brief overview of how you got started in waste?

JEANIE DUBINSKI: By education, I am an attorney. Initially I was a trial attorney for eight years before I made the switch to garbage and I basically got my start with Waste Pro. I knew the CEO John Jennings personally, the company was at a time where they were ready to bring someone in-house, and since we knew each other and I had focused a lot of business litigation, I decided I'd go in with Waste Pro.


When you were first starting out in the industry, did you face any challenges or pushback for being a woman?

"I think they were just a little intimidated by me. They weren't sure who I was or what I was doing."

DUBINKSI: Certainly. I think it's just sort of natural that most of the men in the waste industry, especially in garbage hauling companies and divisions, they aren't used to dealing with a lot of women. Certainly they weren't used to dealing with a woman in an executive position, so I think certainly there was some natural intimidation from them. Not that they were intimidating me, I think they were just a little intimidated by me. They weren't sure who I was or what I was doing ... From my perspective I never really had hostility or a lot of negativity toward me, I think it was more just the environment of garbage for so long had been men and a few women who were probably their equals or below in their eyes. So I think it was more shocking to them that they were now dealing with somebody who was in a more powerful position.


Do you think that's something that's going to start changing?

DUBINSKI: I sure do hope so. I think it's a challenge to draw women into the industry, although I found at my panel and after the panel, so many women came up to me. Even women in leadership, in smaller companies doing their things who we don't really see on the national stage. I was so encouraged to meet these women and connect with them and hear their stories and just to know that they're out there ... I think we're probably more [represented in] numbers than we realize, we just don't see that a lot on the national stage.


There's definitely a deficit of young women joining the industry. What do you think is the best way to tackle that and how do we present the industry as something that's enticing to get young women involved?

DUBINSKI: I really struggle with this because I think it's hard to draw in young women because I think that stigma is, "it's a man's industry, it's a man's world." ... I think it's probably a little more intimidating for women because it is such a traditionally male-dominated industry. So I'm not sure how we really break down that barrier. Women's Council has the scholarship program that we do that's given out to students—primarily women out there, but we do give it to men—whose aspirations are to study in a field that will take them into the solid waste and recycling industry ... I think that if we can get into the colleges in sort of a recruiting fashion, that would open us up to so much more diversity that we could really start drawing in some people. I think it's really an education piece that we need to communicate to the job departments at these colleges and let them know that this is a good industry to work in. I don't know that that's being done. I certainly didn't see it when I went to college.


At WasteExpo you were honored with the Member of the Year Award. What does this mean for you and your commitment to the industry?

DUBINSKI: Wow. It's such a huge honor. As soon as I joined Waste Pro I got very active in [NWRA]. At the time, Bruce Parker was CEO of the association ... He sort of just took me under his wing, he got me introduced to a lot of people, we had very similar backgrounds. From my perspective it made all the difference in the world for me getting comfortable very quickly in this industry ... It's a very close-knit industry and we all like to do business with our friends and we want to be good partners to each other, and I think it's very important that you have a personal relationship in order to be a good partner to someone, so very quickly I developed some great relationships across the industry ... I got to a place where I certainly didn't have all the answers or know very much about the industry but I knew who to call very soon after joining the industry. That has just continued to grow, so NWRA from my perspective has been number one most important for networking for me ... The association has really just made all the difference for me really having my success that I've had up to this day.


What sort of legacy do you wish to have in the industry?

DUBINSKI: I was so lucky to work for Waste Pro and really get the haulers' perspective, which made a huge difference when I came to Big Truck Rental. I was really the first executive here at Big Truck Rental who came from the hauling side and really brought the experience to understand our customer, which is so important regardless which side of the fence you're on—if you haven't been the customer or you haven't been the vendor, it's very hard to put yourself in the other shoes and understand their needs. I think I brought that level to our business and it's really taken us in a great direction ... Big Truck Rental has so many opportunities and so many different ways we can grow, and I'm sort of like a kid in a candy story. I see so many opportunities and so much excitement, but we have to be very smart about it ... As the industry continues to grow and prosper, Big Truck Rental will continue to grow and prosper, so it's just a matter of strategically knowing what's smart for the patterns we take.


What advice do you have for women that want to seek similar leadership positions that you've had, but may be hesitant to do so?

"Demand to have a presence and don't be afraid to speak your voice and sit at the table." - J. Dubinski

DUBINSKI: Most importantly, don't be afraid to be wrong and to make a mistake. I think a lot of times women naturally are a lot more conservative when we pick a direction in our brains. We sort of pause and we over-analyze a million different outcomes, and sometimes we have to follow that gut instinct ... Demand to have a presence and don't be afraid to speak your voice and sit at the table. It's very important that we position ourselves as strength and not as weakness. It's as simple as walking in a room and sitting at the board table or sitting in the chair in the corner. If you want to be in leadership, you need to sit at the table and you need to participate. And maybe that means the first couple times you sit there you're listening, but eventually you need to start talking. You cant really learn until you try. And it's OK to fail; you need to fail, it's the only way you really learn and grow.
Posted by Coastal Environmental Partnership Labels: NWRA, Waste Pro, Women in Waste 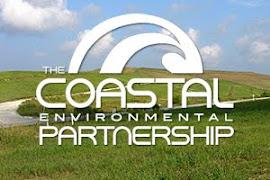 The Coastal Regional Solid Waste Management Authority was formed in 1990 as a partnership between Carteret, Craven and Pamlico counties. The name was shortened in 2008 to the Coastal Environmental Partnership, or CEP. Its purpose is to provide an environmentally sound, cost effective system of solid waste disposal for the citizens of the three member counties. For more.